When it comes to gimbals, one brand that immediately comes to mind is Zhiyun. The company is not new in this field, and among the many gimbals it offers, there are also those from the Q series, which, unlike the main one, are easier to use. Today in testing there’s the Smooth Q4, which winks solidly at one of its toughest competitors.

Zhiyun Smooth Q4 Edition offers a well-versed package. First of all, a carrying case, which will allow you to take it with you without fear of damaging it. Inside, in addition to the gimbal, there is also a charging cable and LED flash with color filters.

As already expected, the package also includes a tripod, which will allow you to place the gimbal on a plane, and is also excellent for video bloggers, who will be able to leave the gimbal in position on the desk, and they are automatically framed thanks to the tracking function, which we will talk about. 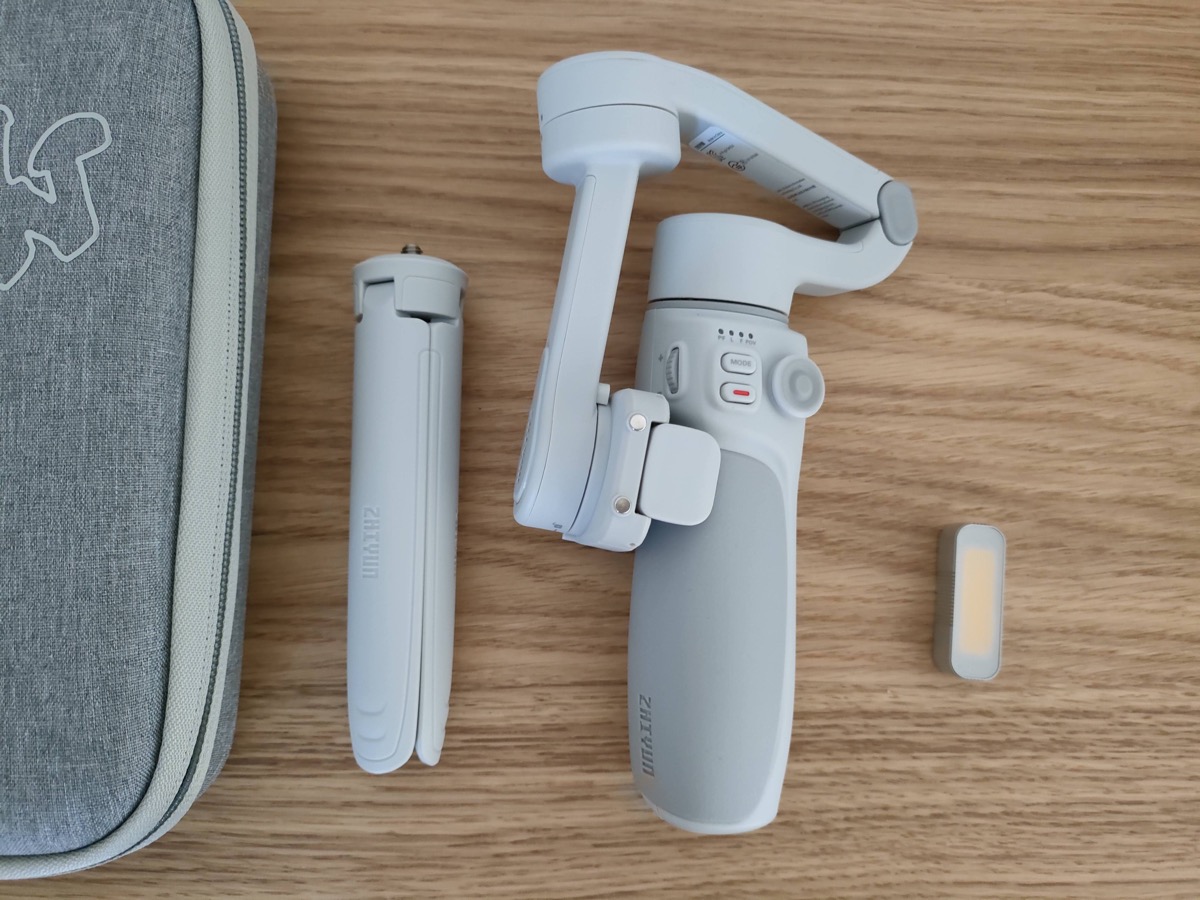 Just open the package and you’ll instantly realize that this gimbal oozes DJI foldability, coloration and many more features. However, it is not a simple clone, because from the first grip you realize that it is a well-organized marginal part. Moreover, Zhiyun has been in this field for many years, and definitely does not lack the experience to create products that can shine with their own light. 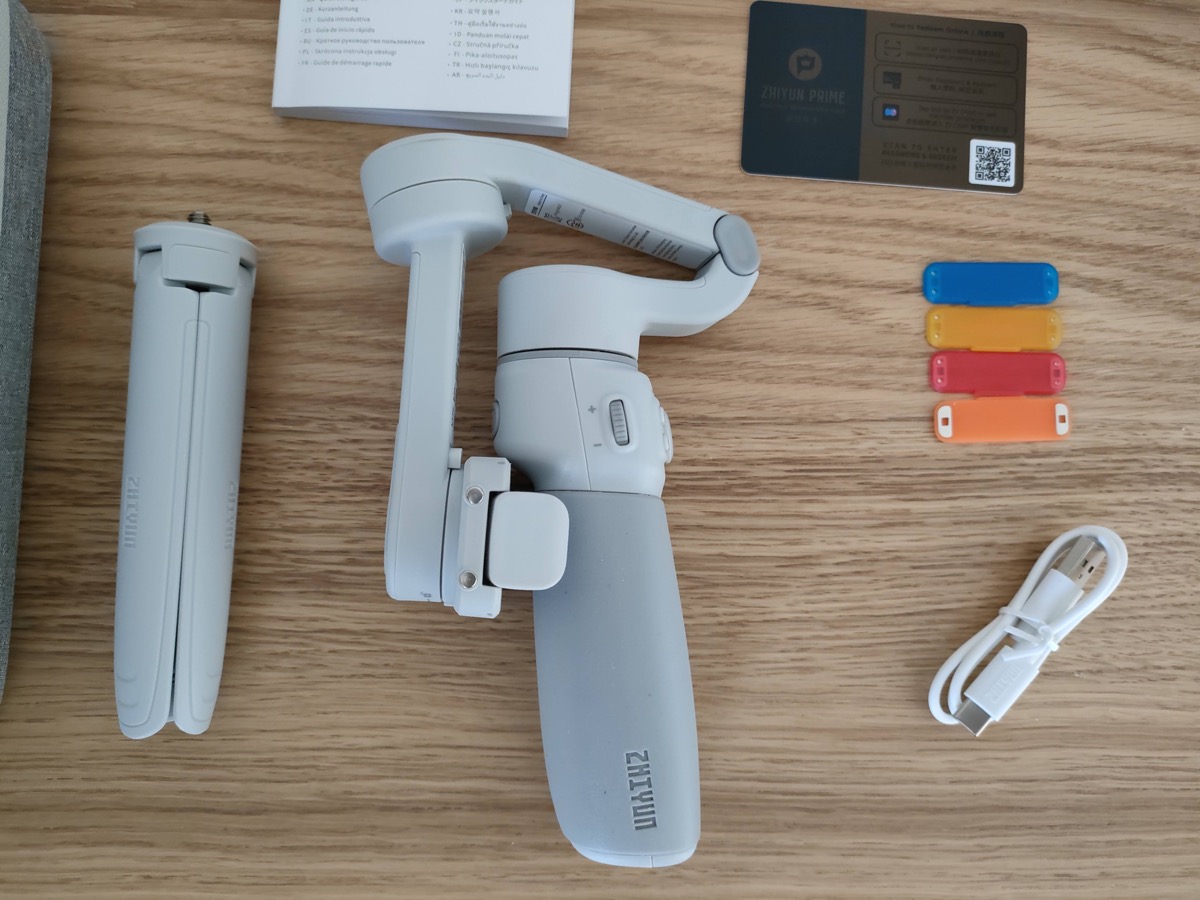 Compared to the main string, for example smooth 5From opening the package, this Q4 shows itself to be much easier to use. First of all, we also note the different dimensions: the Q4 is designed to be easy to transport, and certainly lighter and more contained. 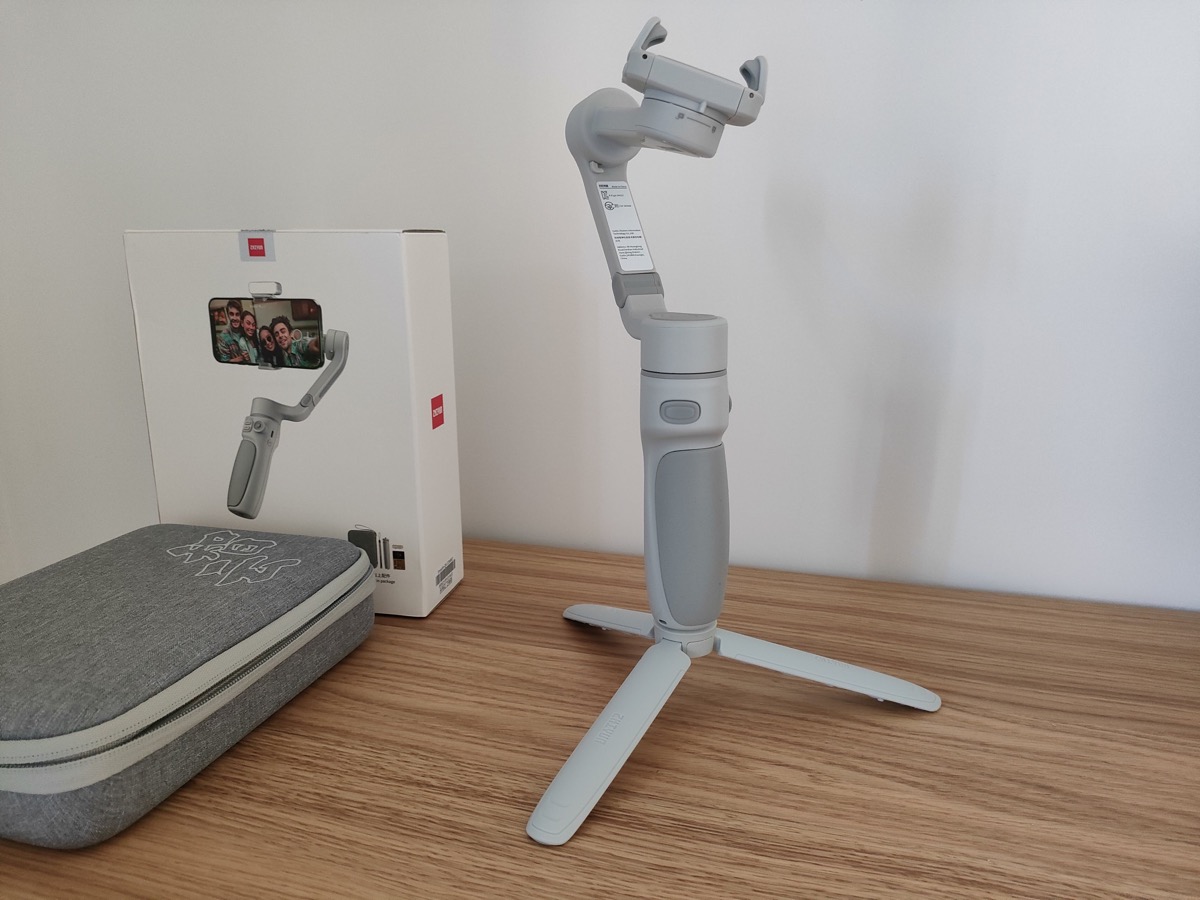 It folds back on itself, so it’s even more discreet, and it can easily be transported inside any backpack or, why not, in a briefcase. Once explained, we realize that this gimbal also functions as a telescopic rod, with the possibility of extending the center stick, to allow the user to take more specific shots, useful for shooting from one another, or for group selfies. 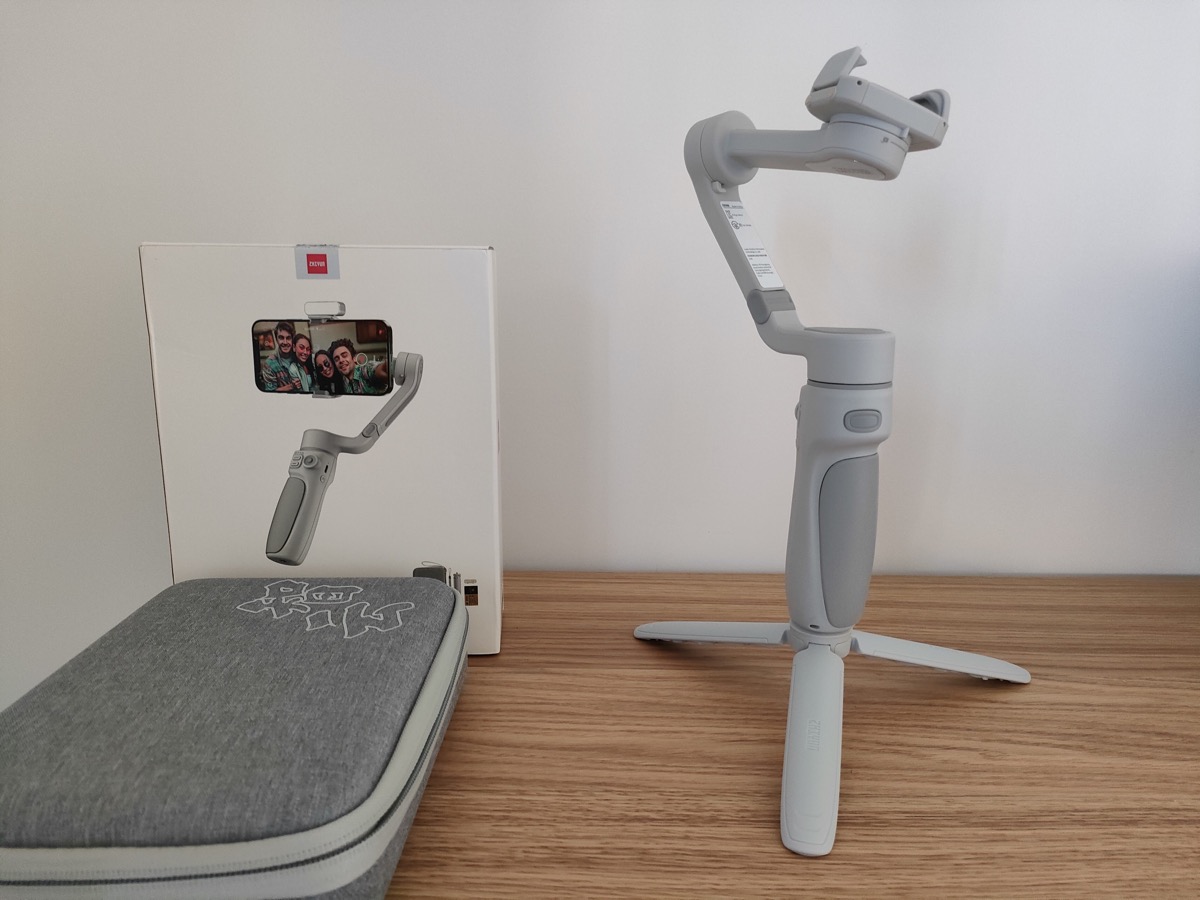 Like many of the company’s other gimbals, the Smooth Q4 also allows you to place the smartphone in landscape or portrait mode, and to switch between the two modes to race, simply press the back button three times. 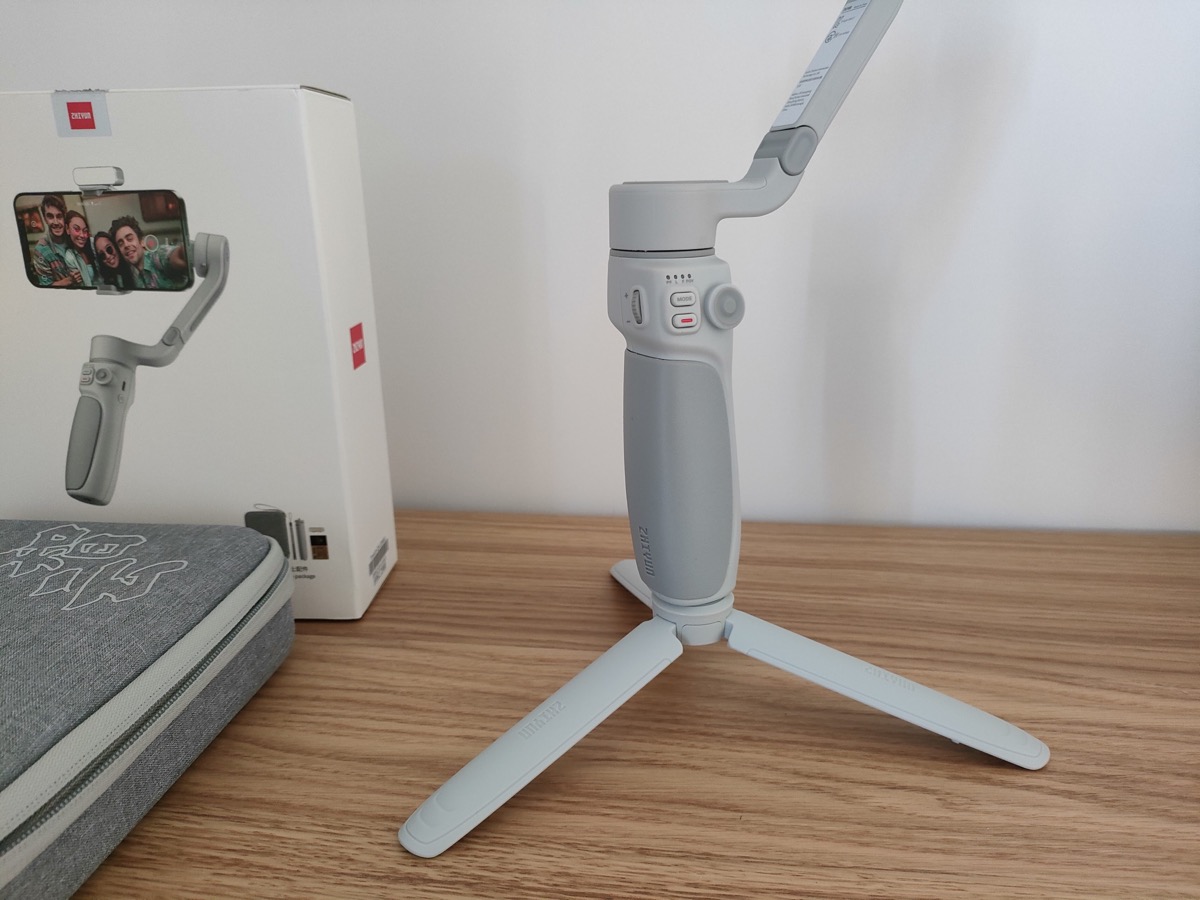 After placing the smartphone, it is necessary to find the best possible balance: to do this, simply move the smartphone to the right or left of the clamp (or down and up in the case of a vertical housing). The more balanced a smartphone is with the gimbal off, the better the motors will work, allowing shooting as smoothly as possible. 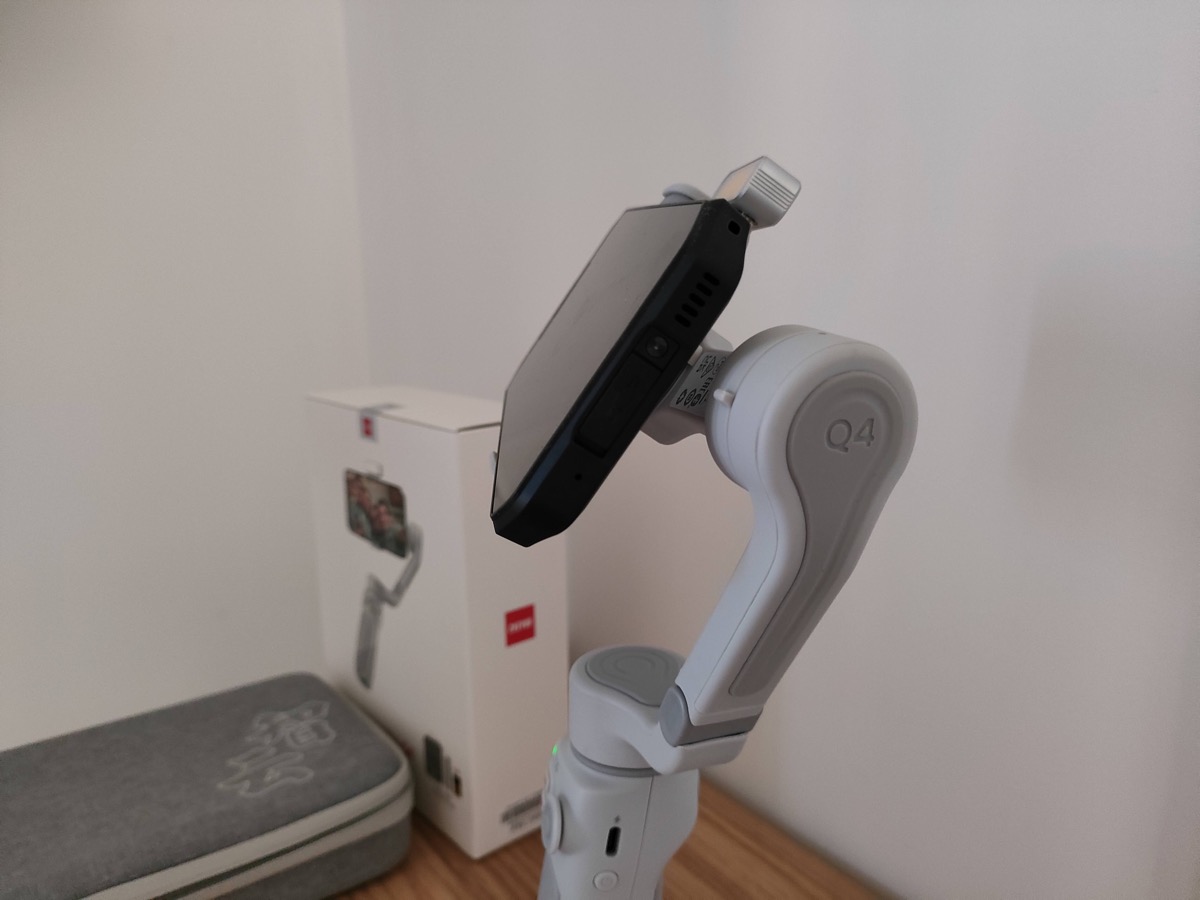 Once the smartphone is placed, it will be enough to turn the gimbal to see it turned on.

Smooth Q4 is a three-axis motorized mount, with internal motors that activate after the phone is mounted in place, being able to choose to place it in portrait or landscape mode. Thus, the peripheral stabilizes – just as on the main series, tilt, pan and roll, providing various controls on the stick, so you can shoot without having to touch the smartphone screen. However, for correct operation, it is necessary to install the Zy Cami application, which is freely available on the App Store and Google Play. This can be controlled almost entirely via the buttons on the gimbal stick, the ability to start or stop recording, take pictures, choose a shooting mode, pan pan, zoom, and more. 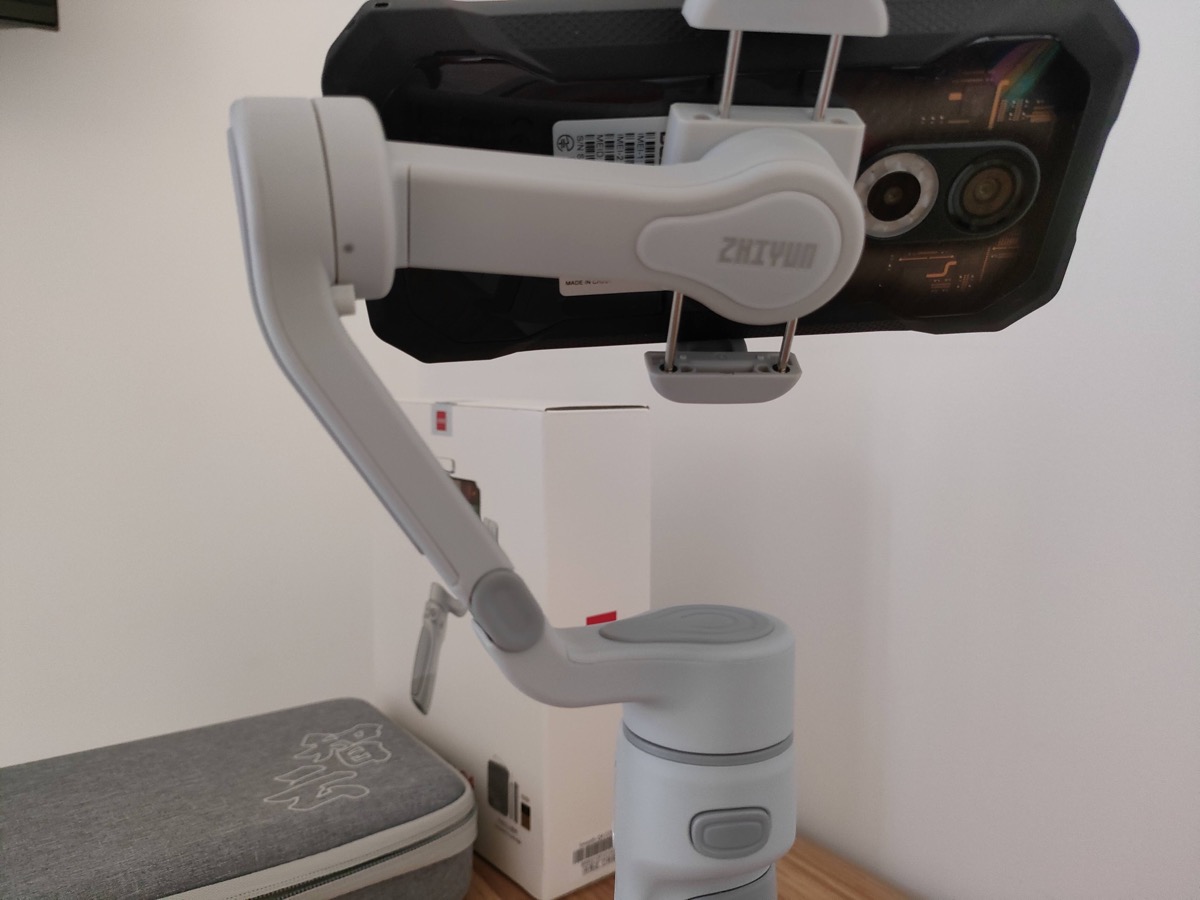 Unlike the Smooth 5 Series, the Q4 features a simplified control keyboard. Not that they lack dedicated keys for any operation, but they are much less than the more professional model. In fact, in the front, only the analog stick insists with the record button and the button to change the shooting mode. However, on the side there is a slider for managing focus, turning on the LED flash and changing the intensity, while on the back there is a button for multiple functions: one-press to deactivate the SmartFollow function, double-press to change the position of the axis and three-press to switch from landscape to portrait mode and vice versa. 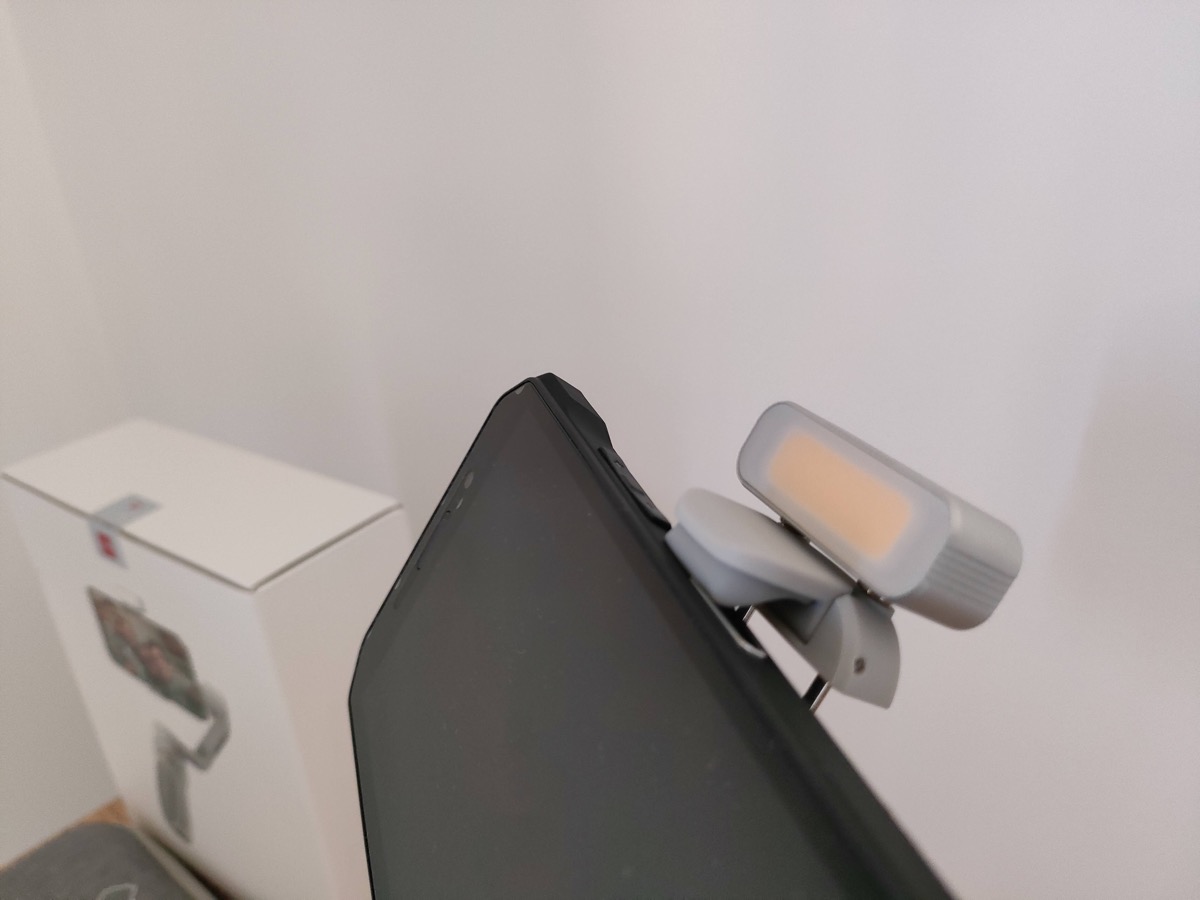 As mentioned earlier, there are several shooting modes for this axis. The first “PF” allows the axis to remain locked on the horizontal axis, while the smartphone follows the movements of the wrist, thus allowing shooting with a certain freedom of movement from left to right, and vice versa. The second mode “L”, which stands for “Lock”, locks the lens in one point, and blocks all other movements: in this case, whatever the movement of the hand, the phone will always and only indicate one selected point.

The third mode, denoted by the letter “F”, is the one that allows maximum freedom, since it will allow the holder to move both horizontally and vertically, and the camera of the phone will follow all movements of the hand and wrist exactly. Once again, the POV, Point of View mode, tracks all wrist movements, but with a much more precise and fluid movement. Last but not least, the “V” mode, Vortez, in which the tilt axis motor rotates upward 90 degrees while the tilt, roll and swivel axis motors follow the rotation of the axis: This is a mode that may be useful for shooting low subjects, such as animals.

On the other hand, if you want to activate the tracking mode, allowing the axis of rotation to automatically follow a subject, it will be enough to draw the area to follow on the screen. The tracker option works well, and on several occasions we have tried to escape the eye of the camera but failed. It activates very quickly and turns out to be one of the most intuitive modes the gimbal has to offer.

Compared to Smooth 5, Q4 was much easier to use. Both the first configuration and the daily use of the Q4 are smarter. This is gimbal. Much lighter, and therefore easily transportable, it does not bother even after shooting for a long time. It duplicates almost all functions of Smooth 5, although the motors probably provide less power.

You can feel it right away, contour being generally lighter. The Smooth 5 feels much sturdier and can handle really heavy weights, but even this Smooth Q4 will still be able to properly accommodate the iPhone Max.

Also in this case, as for all the gimbals we tested, the best shooting result we got with the iPhone. For its part, the gimbal offers excellent stabilization capabilities, securely holds smartphones, and even heavy terminals manages well without any effort.

As always we leave you a movie shot entirely with the gimbal, to show you the exact capabilities of the drone. In addition, we also took some shots with the PANO mode, to show the possibilities of shooting in panorama, which is fully automatic: it will be enough to take the shutter button once, so that the drone makes the necessary movements to return home the result you see.

The application is called the proper functioning of the gimbal cami costume, Available for free for iPhone and Android devices. In fact, you can also use the gimbal with the native app of your smartphone, but in this case you will lose all the physical controls placed on the stick. The application allows you to record videos in up to 4K resolution at 30 frames per second, and also includes other interesting tools.

First of all, because it integrates a kind of social network for posting your videos, and in it the videos posted by the community are displayed. These can give an idea to get the most out of the gimbal and create special effects.

In addition, the application integrates its own editor, thanks to which you can edit videos created on the go, cut various scenes, apply background music and, in general, make all those standard corrections that are expected of a mobile editor.

Moreover, the app offers a smart mode that helps with automatic creation of videos: you can choose a template, apply it, and record small clips, following the instructions on the screen. The result will be a mini movie already edited, complete with background music and special shooting effects, with pan, zoom, and more.

In addition, the same application, in addition to presenting the photo and video section, offers other imaging tools, such as the Dolly Zoom effect, the Time Lapse section and Hyper Lapse.

Smooth Q4 is definitely the preferred choice for those who use it for non-professional purposes and want to always carry it with them. The smaller size, compared to the Smooth 5, makes it an ideal travel companion. In addition, the possibility of extending the center column for use as a motorized selfie stick makes this device even more versatile.

The learning curve is certainly less than that of Smooth 5, and that makes it an ideal choice even for beginners: it’s certainly not shoot-ready, requires minimal learning and little initial setup, but it’s very easy to use.

Good and universal stability in terms of hosting capacity for almost all smartphones on the market.

The Standard Edition costs €139, and you can stop at this if you already have a carrying case, and if you think you don’t need the flash. Otherwise, in the €169 package, in addition to the Smooth Q4, you will also find the transfer case, as well as the magnetic LED flash and color fill filters.

Finally, the tracking mode is excellent, which allows you to quickly and accurately follow a subject: just trace the outline of the subject on the screen and you’re done.

You can buy the gimbal on Amazon for 139 euros directly at this address. Currently you can find it at a discount of 10 euros

Invisible smart socket for 12 euros on Amazon: forget about the mess