When it comes to portable batteries and charging stations, one brand has made its way to this stage the most. Obviously, we are talking about Anker, which is now well known in the field of mobile charging accessories. Today in the test Anker 737 charging station, display battery 24 thousand mAh, with GaN Prime technology and many other stocks in its bracket. Of course it’s not cheap, but the price list is in line with what it offers.

First of all, it is good to understand that we are not dealing with a simple external battery, but a real portable charging station. This will definitely help digest the weight and volume. Especially the first, considering that it is not one of the lightest in circulation, as it weighs 631 grams. Dimensions are also very generous: the Anker 737 is 4.5 cm long, about 15.5 cm long and 5.5 cm wide. In short, it’s not a battery that gets stuck in a bag or pants pocket. Instead, as mentioned earlier, it’s a more complete and performing charging station.

In the package, in addition to the station itself, there is also a USB-C – USB-C cable that supports every 140W of power that the battery can use. In addition, there is also a small carrying case that helps not to damage the battery, allowing you not to scratch the screen equipped with it. 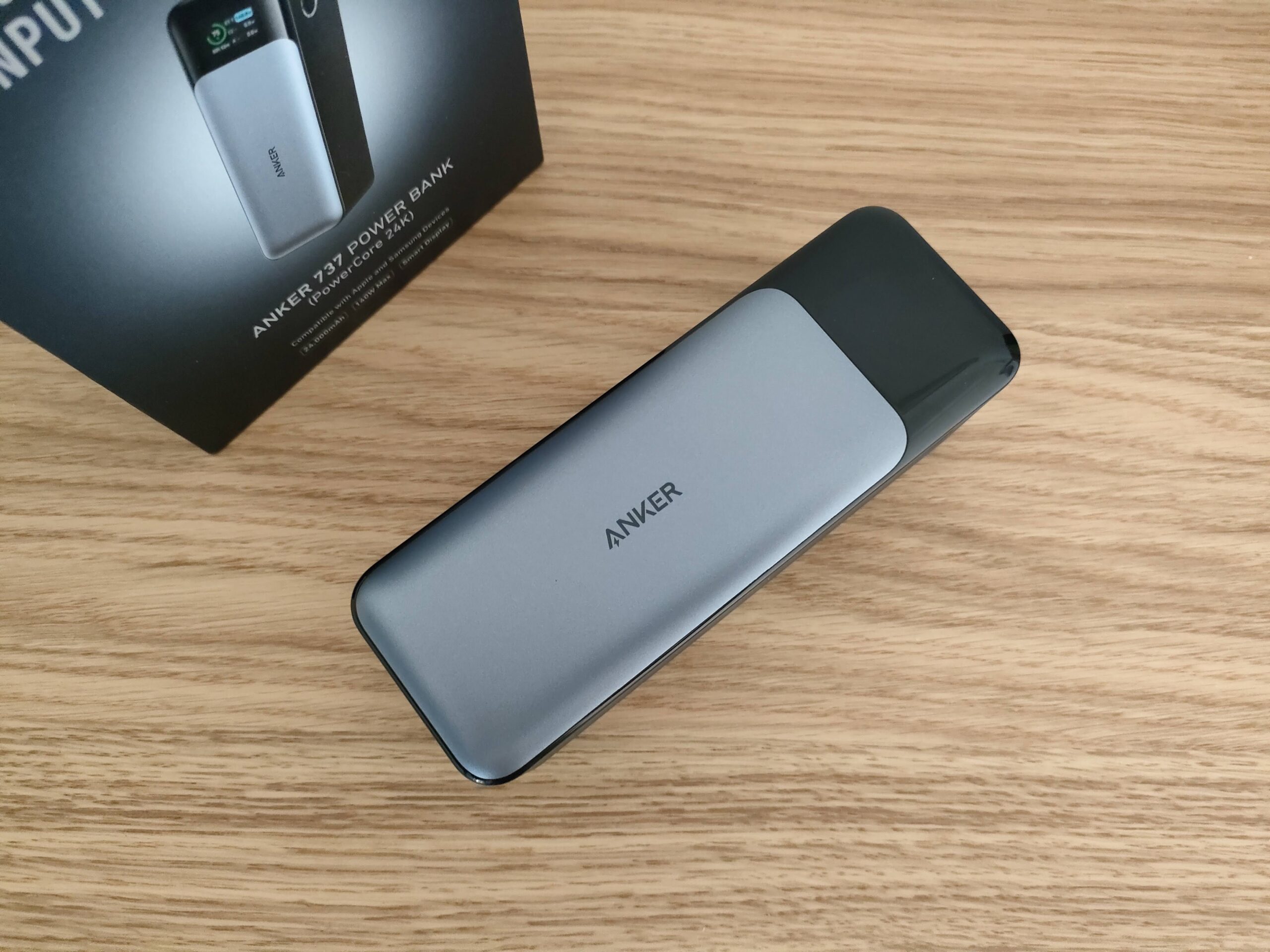 how was it made

As mentioned earlier, the dimensions and weight are very generous. In the hand, it is immediately perceived as a small slug, really solid and heavy. The top surface is completely smooth, then it is broken by the part of the screen that really shows a lot of useful information while charging, both in and out. On the other hand, the side parts offer a plastic pattern with a texture that helps to grip it.

The battery provides a single button on the side, which can be pressed several times, to provide different information on the screen. On one of the short sides at the top, on the other hand, there are three entrances. Two USB-C ports serve as input and output, as well as a USB-A jack with IQ technology. An unusual shape of the charging station, which we generally feel we can promote with flying colors. Even on an aesthetic level, the Anker 737 is still a premium device, even if the materials are ultimately plastic. 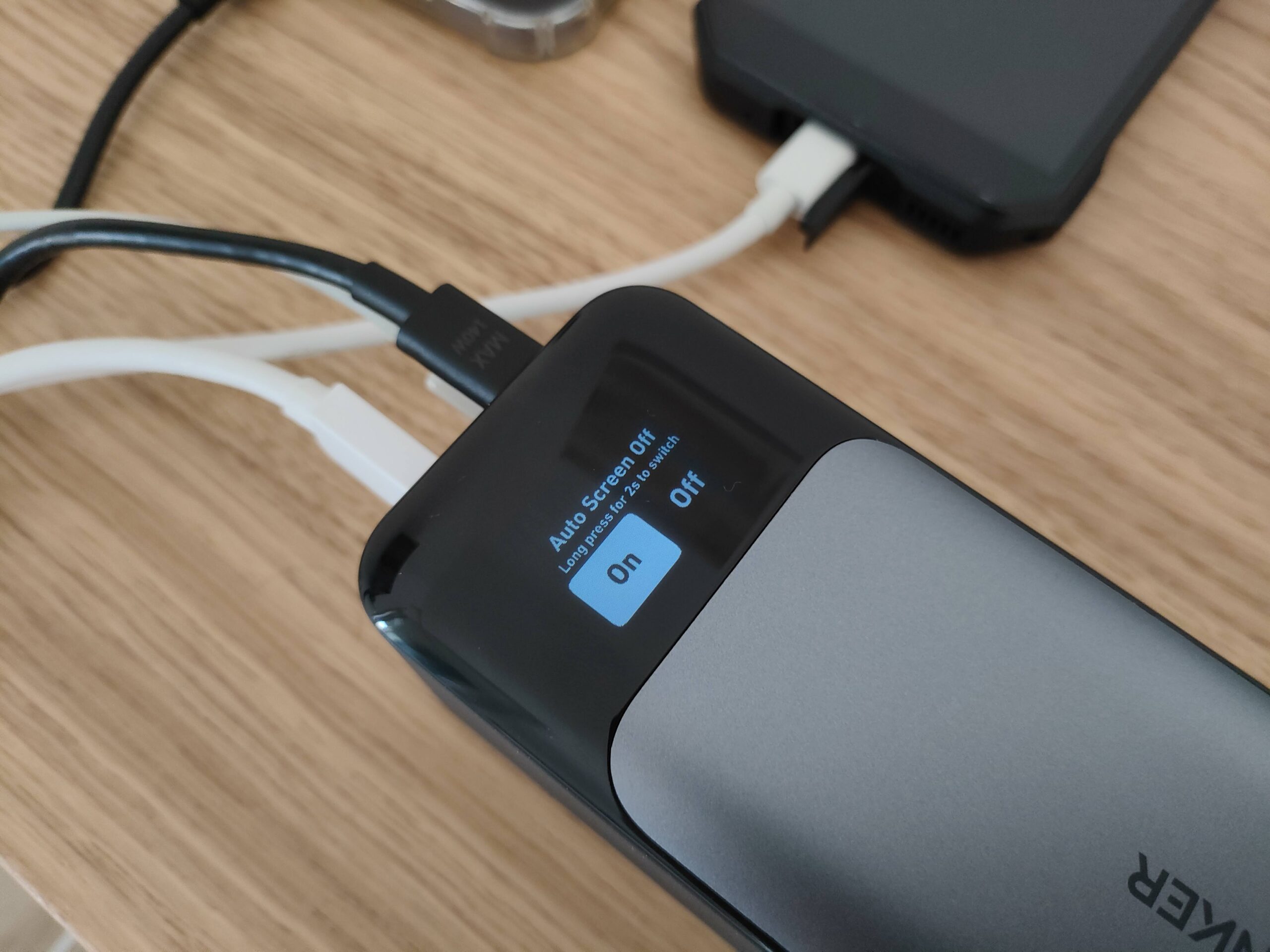 Anker 737 is a powerful charging station, equipped with the latest Power Delivery 3.1 technology, capable of delivering powerful bi-directional charging, up to 140W overall. 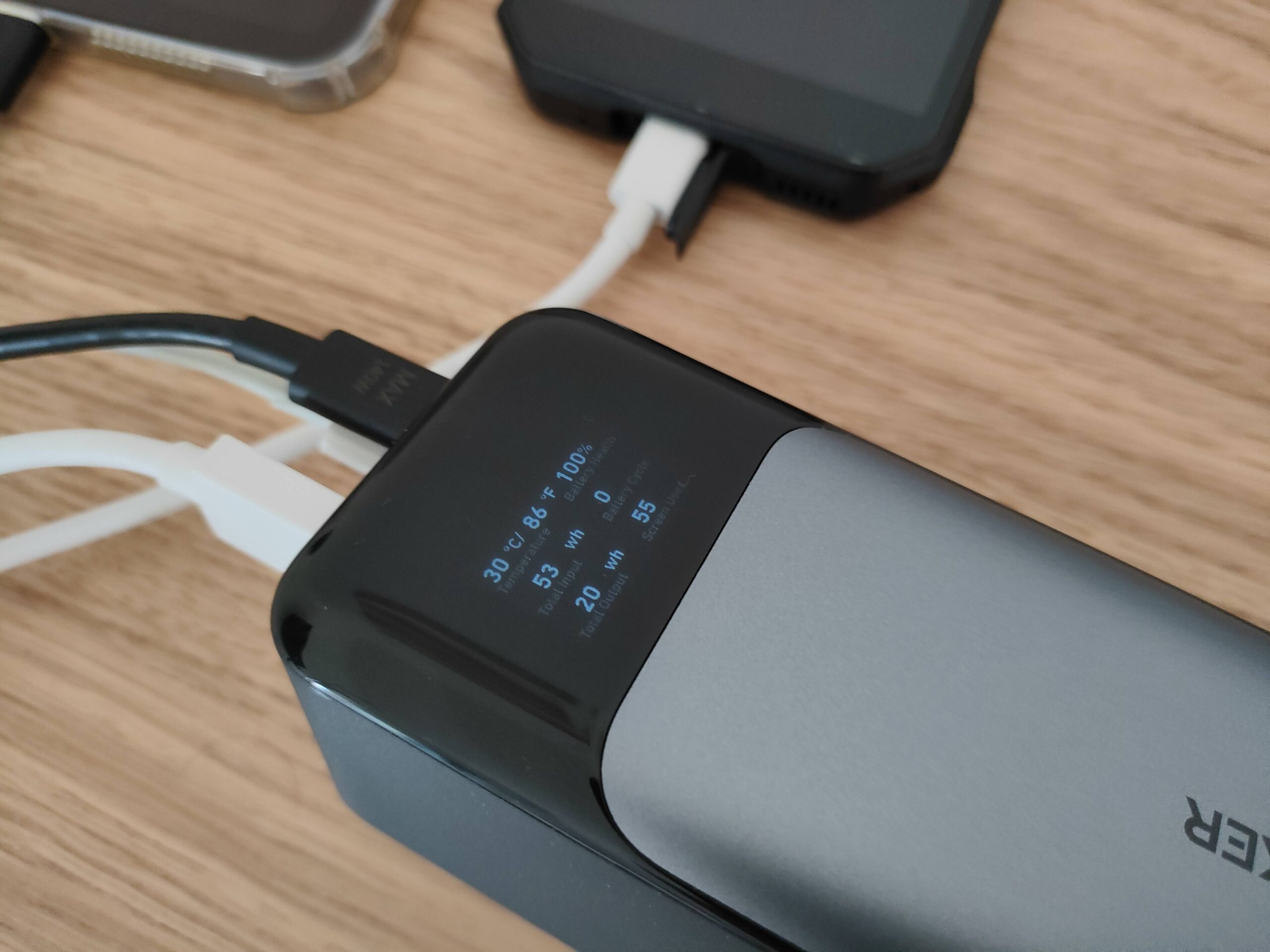 It offers a nominal capacity of 24,000 mAh, capable of charging devices like iPhone 13 or Samsung Galaxy S22 up to about 5 times. It is clear that such a station can be used, and we already explicitly recommend it, for those who want to use it even with laptops with a USB-C port, such as Apple MacBooks. This charging station, while able to charge smartphones and tablets at full speed, will get a little lost if used with mobile devices only. 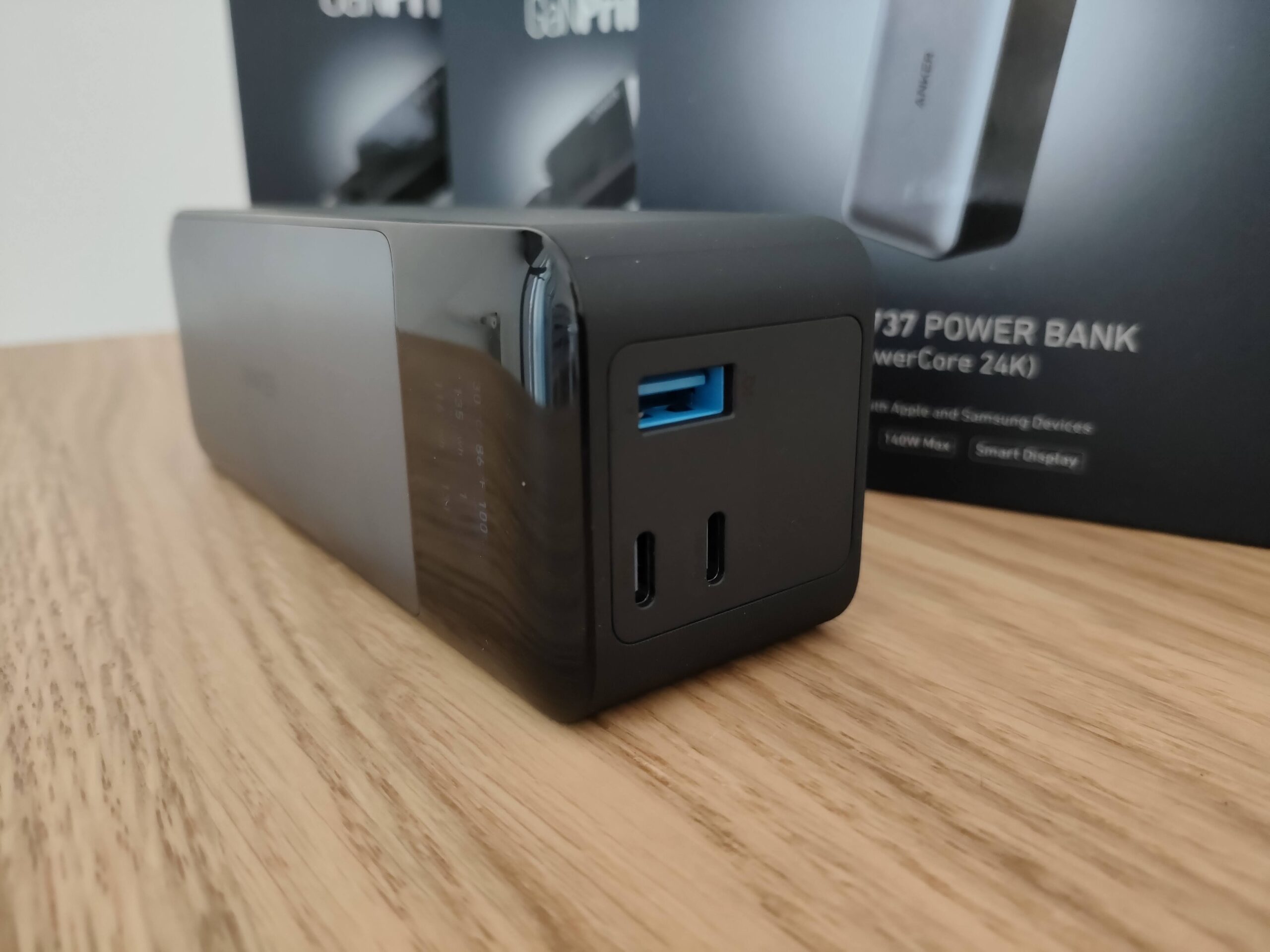 As mentioned earlier, the battery is also equipped with a display on top. This is able to provide different information while charging, so as to actually check the charging speed of each device.

First, the display shows the percentage of battery charge remaining. Moreover, it is able to provide the Ws that are supplied or collected from the battery in real time, when connecting devices to be recharged, or when charging the recharging station itself. Measurements are made for one inlet. Note that the two USB-C ports, both capable of working as in and out, are capable of returning 5 ~ 3A / 9V ~ 3A / 15V ~ 3A / 20V 5A / 28V ~ 5A for a total of max 140W, while the USB – port provides an Iq ~ 5V output 3A / 9V ~ 2A / 12V ~ 1.5A with a total of 18W max.

Among other technologies, this charging station is equipped with an Anker GaN Prime powered charging system, an innovative stack design, PowerIQ 4.0 for greater efficiency and ActiveShield 2.0 for intelligent temperature monitoring which, let’s expect, is always special content, both when charging devices external or when charging. During our tests, even if three devices were connected at the same time, we never recorded high temperatures of the charging station, which always remained in the 30-35 degrees Celsius range. 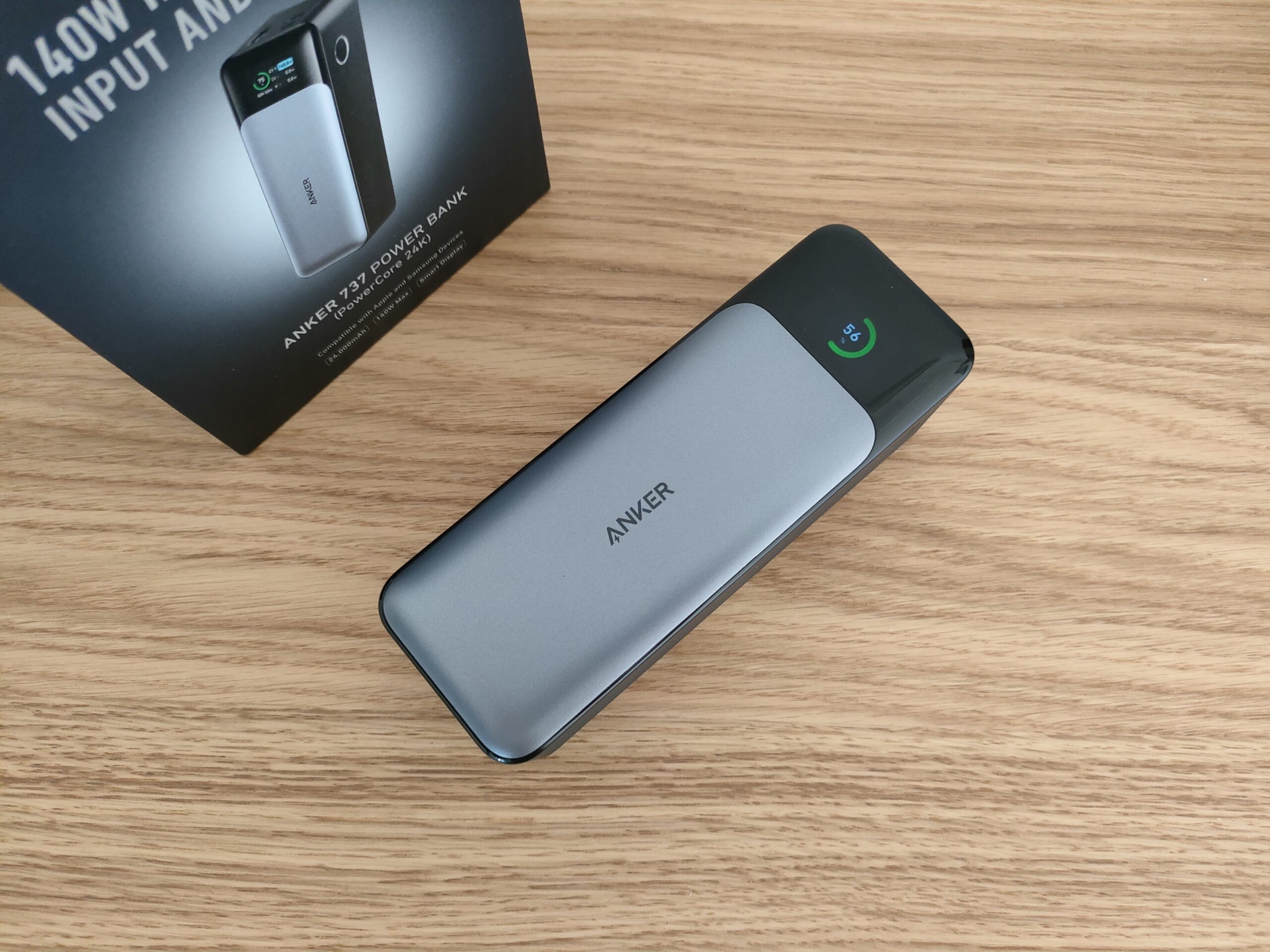 As for charging speeds, it naturally depends on the connected device. When it comes to Android, the charging world is really fragmented, and while everyone is now adopting the USB-C standard, they offer proprietary technologies that can only be audited with the included wall adapters. This means, therefore, that the speed that the Anker 737 can aspire to, no matter how powerful it is, will always be less than that which would be obtained with the rapid reloads offered by individual manufacturers. 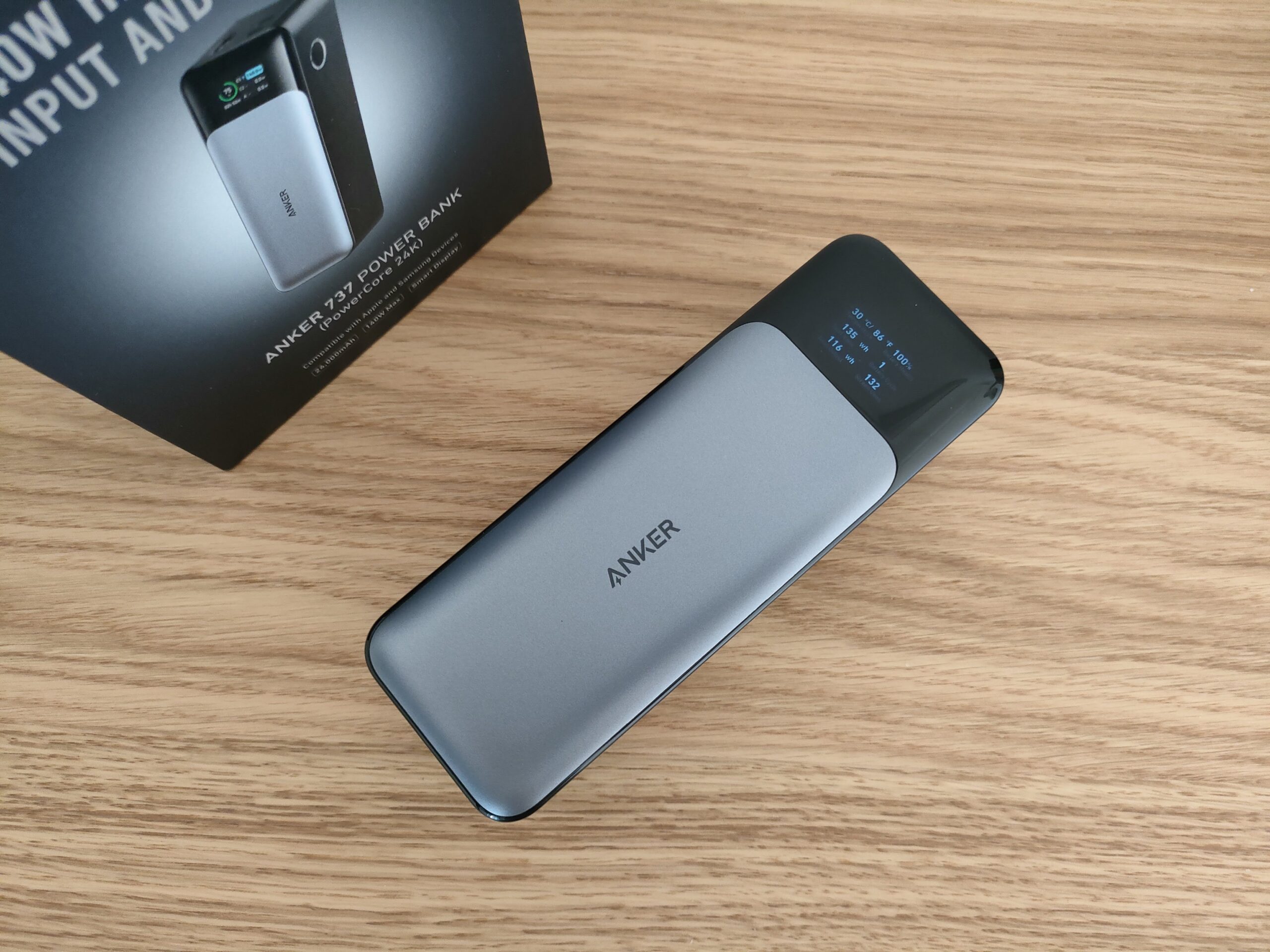 For the world of Apple, we simultaneously tested the charging of the iPad mini 6 and iPhone 12 mini. The latter was charged at average speeds of about 10 watts, ranging from about 9 to 13 watts. As for the iPad, the data back on the screen was higher, with an average charge of around 17W. However, these speeds tend to decrease as they get closer to 100%. In fact, the iPhone’s charging speed exceeded 70%, and was on the order of 7 watts, and the speed of the iPad at 11 watts. Of course, all using the original charging cables or, at most, the cables in the Anker package.

Note that after charging the iPhone and iPad as described above, the Anker battery had exactly 60% of the charge remaining. That’s after delivering about 7,351 mA. Performing two calculations, and assuming the same recharge is repeated again, you will get 20% of the remaining charge, after connecting 14702 mAh. Given that all batteries provide 75% of the declared power, it is likely that it is believed that the Anker 737 fully complies with this data, capable of delivering about 18,000 mAh.

However, regarding charging times for the station itself, with a wall adapter max of 67W, it takes about 4½ hours to fully recharge. Times are greatly reduced if you can get hold of a more powerful wall socket, just like those on the Anker GanPrime 7 series. We tried recharging it with the 737 adapter: the battery fully recharged in about 50 minutes, averaging around 88 watts. In this last case, the battery temperature reached around 42 degrees, which is a really good result considering that the ambient temperature in this period is also high. 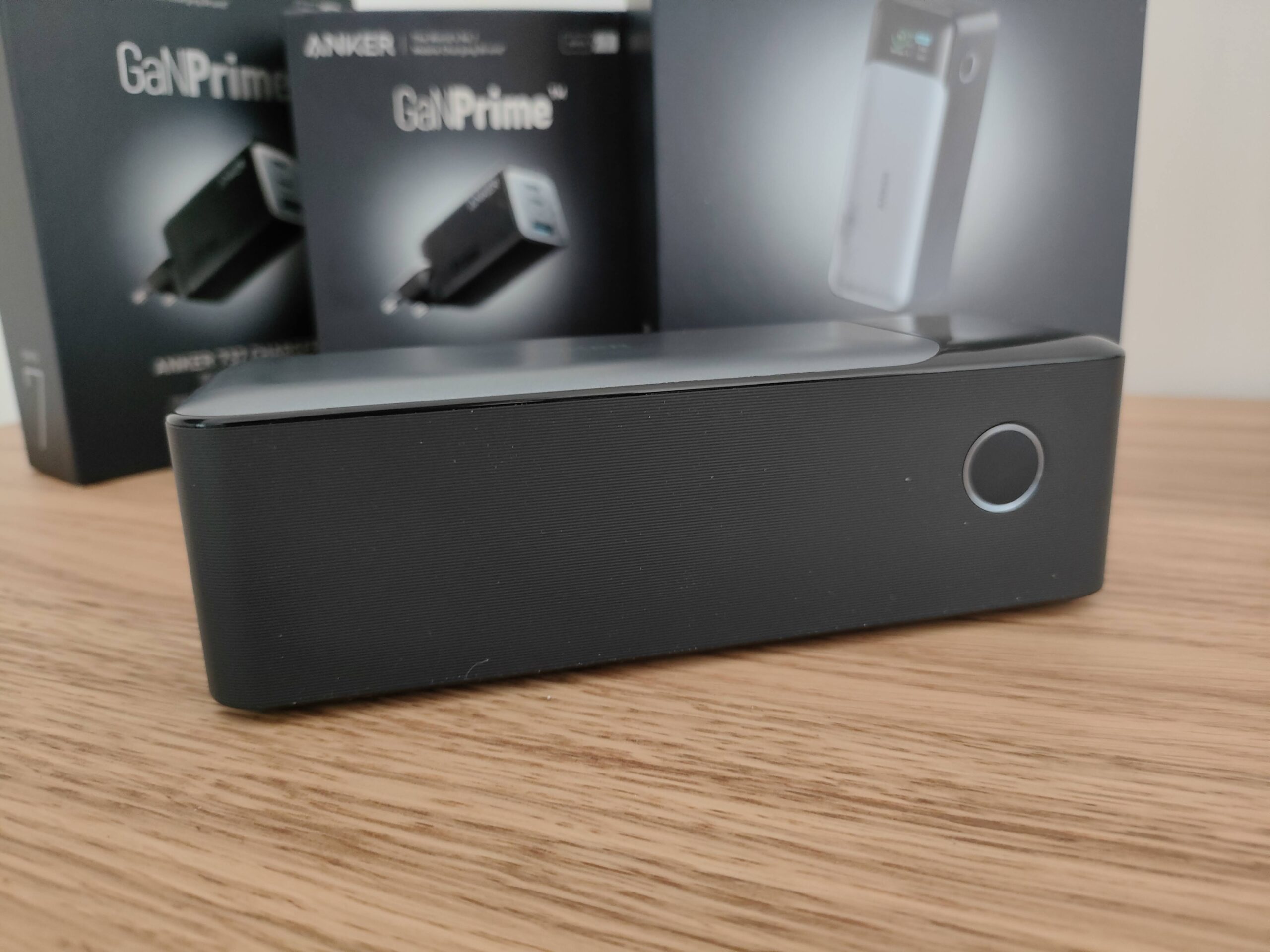 Anker 737 is not a cheap battery. It is a charging station with a list price of 149.90 euros. It is a totally recommended tool for those who travel a lot and need to charge their iPhone, iPad and MacBook at the same time. Absolutely reliable, it is able to charge devices while keeping temperatures to a minimum, avoiding overheating. 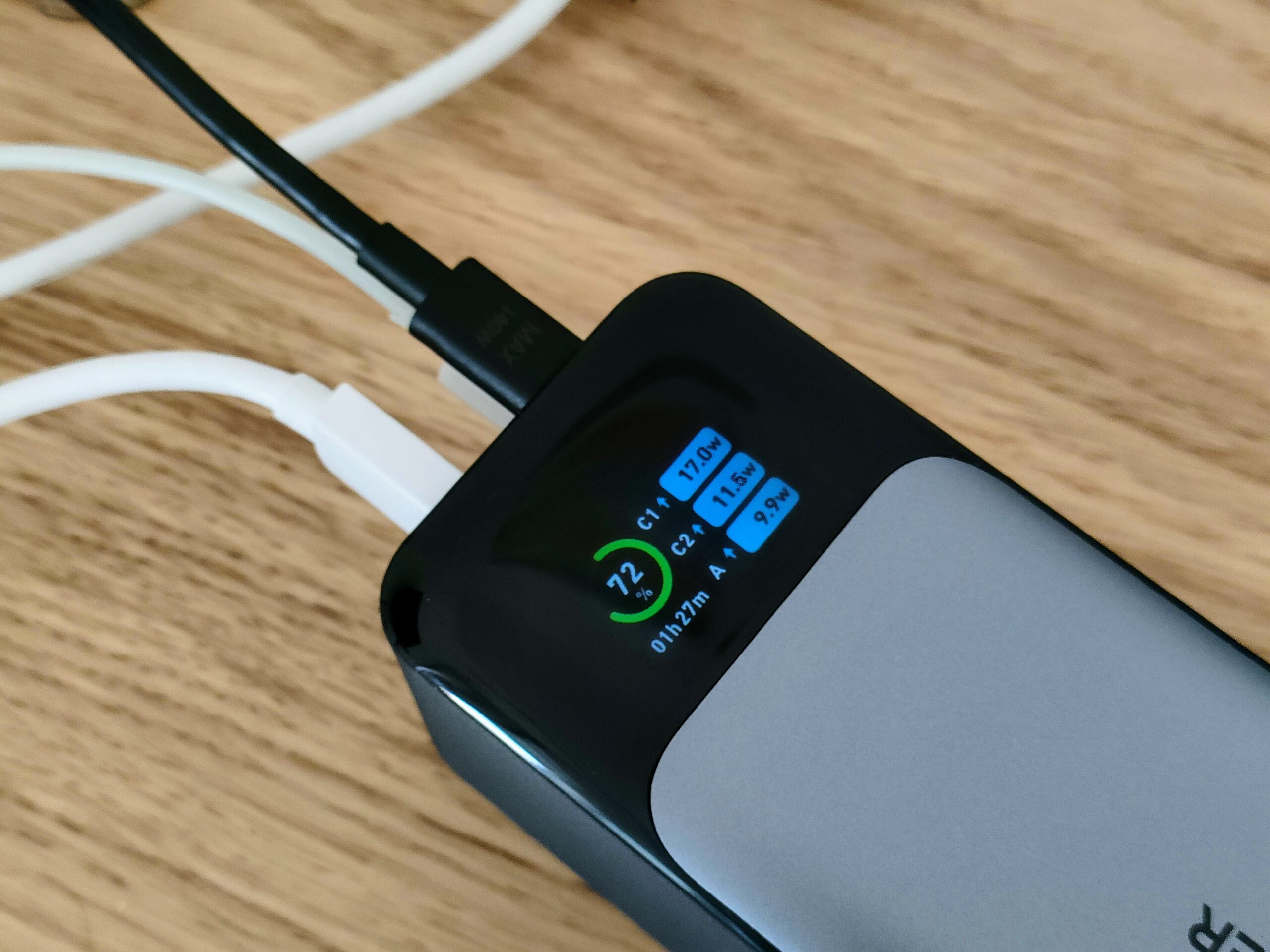 One of the strengths of this terminal is the smart display, as it always provides real-time data to understand exactly how the charging takes place, as well as the ability to display on the screen the estimated charging completion times. 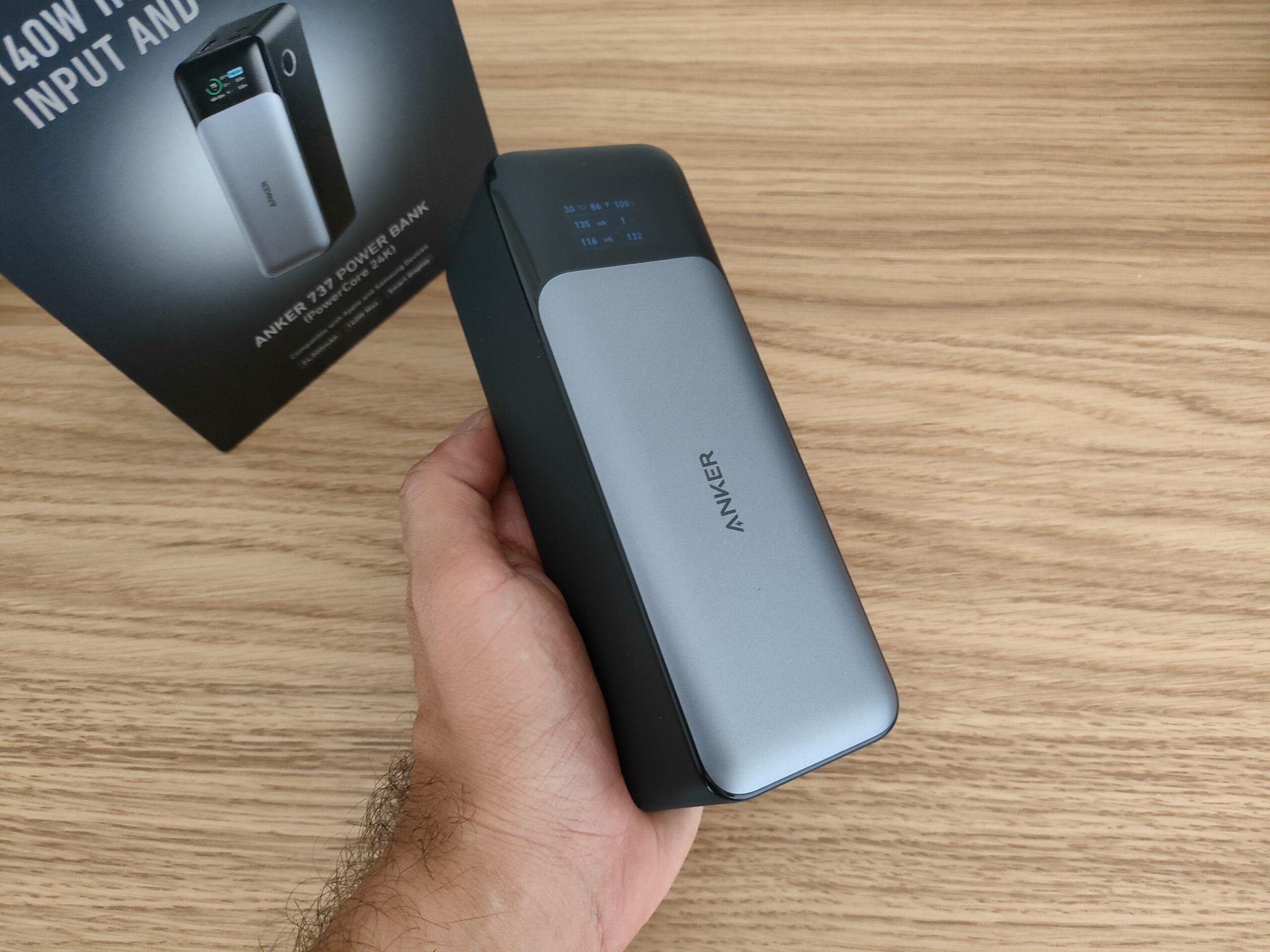 The nominal capacity of 24,000mAh will ensure you never run out of water even with a busy day on multiple devices. Of course, the advice is to equip yourself with a very powerful wall socket to recharge it, otherwise it will also take an entire night to get the station back to 100%. 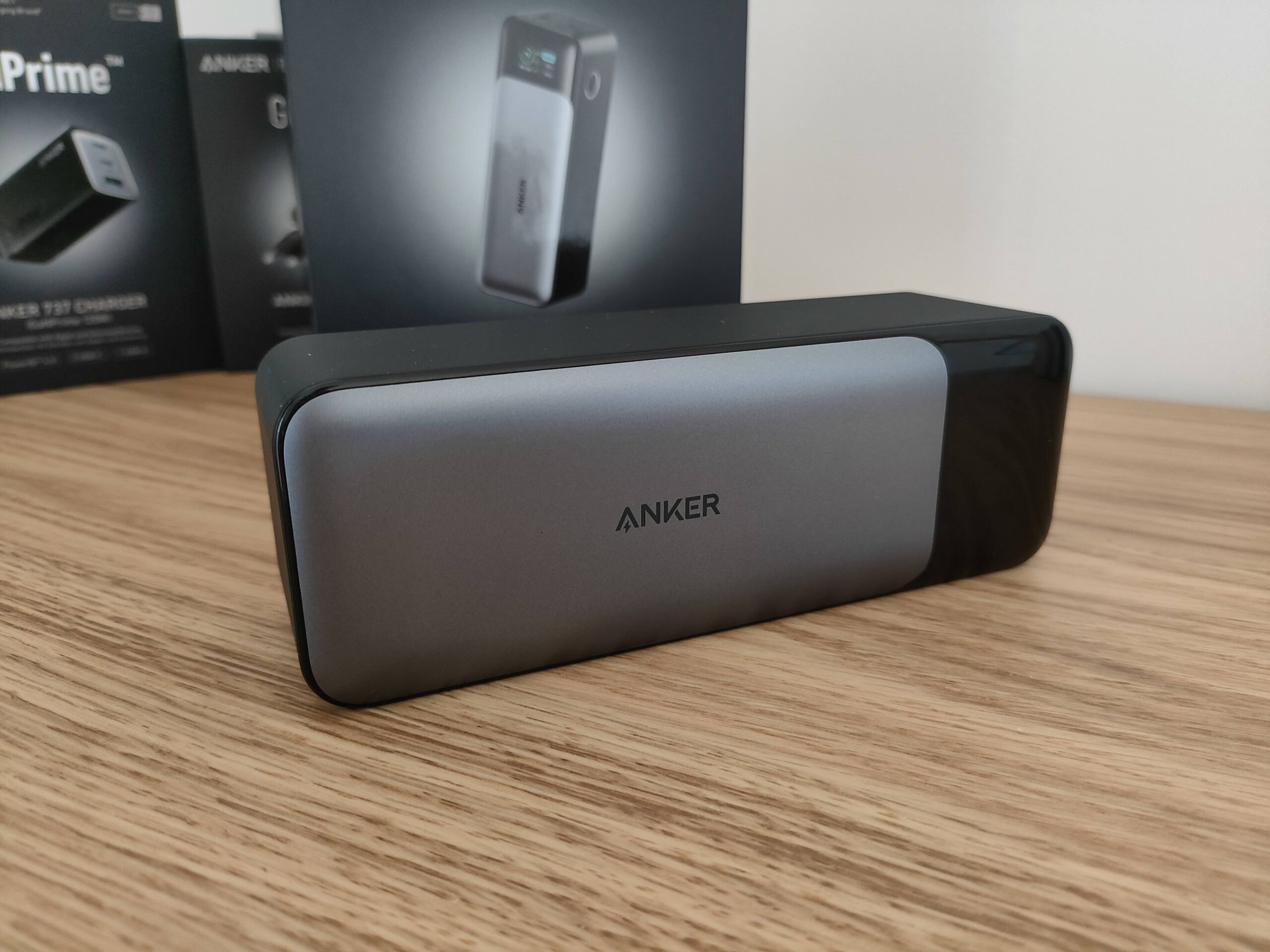 At the moment it is available on Amazon at a price of 127 euros directly at this address.

Samsung, the 50-inch QLED UHD 4K Smart TV at the lowest price ever

Great idea at a scary price